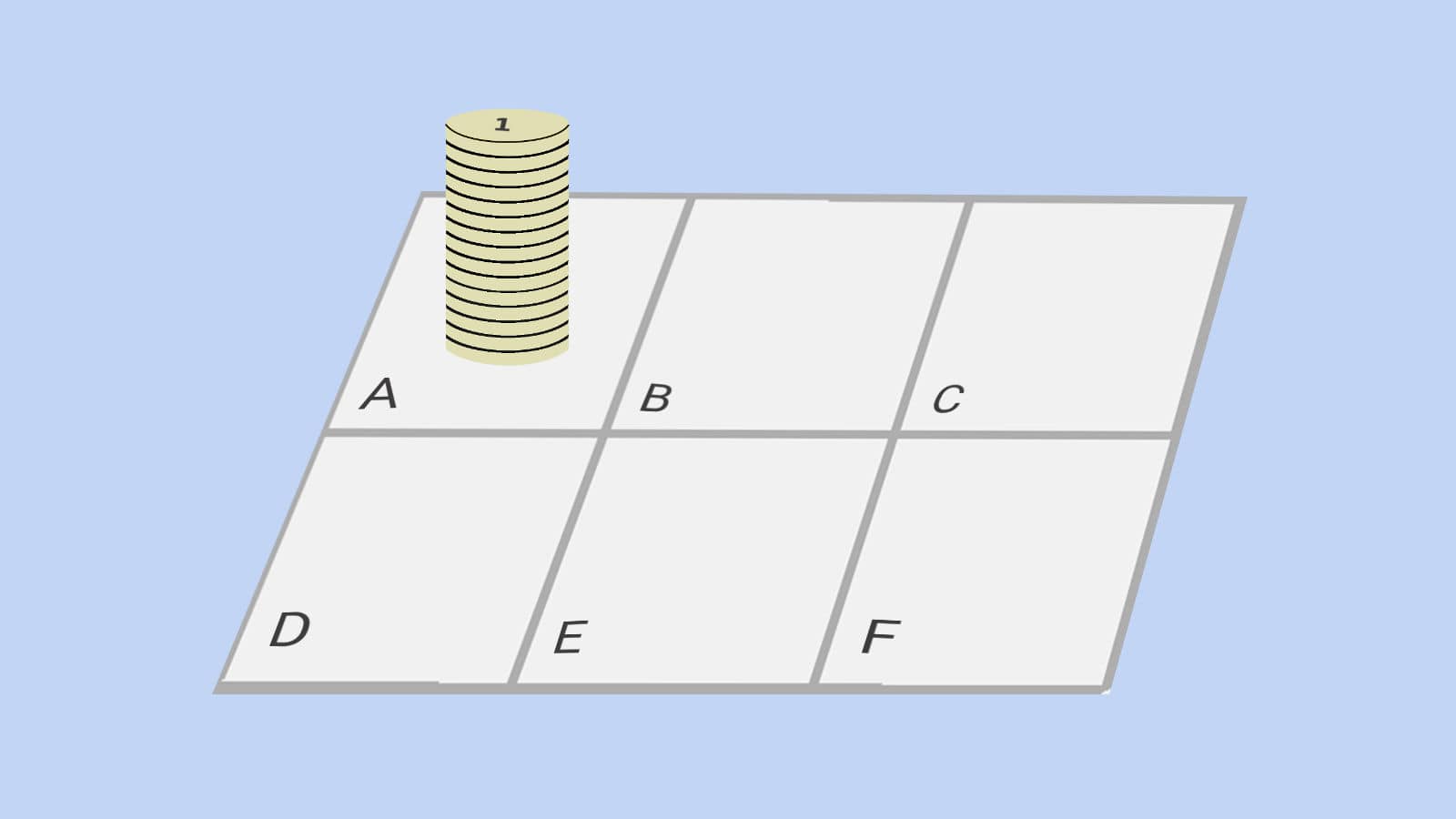 Transfer a pile of 15 numbered discs from square A to square F on a board with 6 squares in minimum moves. Ensure: A disc can't be on a lower numbered disc.

The riddle: Transfer a pile of 15 numbered discs

Then divide a cardboard or paper sheet into six square areas and mark the squares A, B, C, D, E and F.

In top row there will be squares A, B and C and in bottom row D, E and F.

Figure with the pile on the board is shown below. 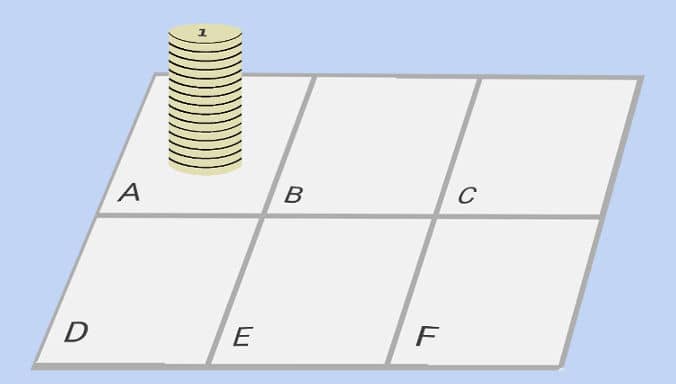 Now place the disc number 15 in square A and place the other 14 numbered discs on top of it one by one to make a pile.

Make the pile in such a way that the top disc will be numbered 1 with consecutively increasing numbered discs to the bottom-most disc numbered 15.

Your job is to transfer the pile to square F with the numbered discs placed on top of each other in the same way of increasing number towards the bottom.

You have to transfer in minimum number of moves and in no move of a disc you can place the disc on another disc with number lower than its own number.

In a move you can move only one disc.

Frankly speaking, you may not need so much time if you start imagining the possible moves strategically. Strategy and reasoning can help you solve the riddle quickly.

Solution to Transfer a pile of 15 numbered discs riddle: Knowing a certain goal, understanding how to expose an intermediate disc and forming a strategy

I realize first the certain thing that I must do.

Conclusion 1: At one stage, I must expose the bottom-most disc 15 as a single disc in square A and transfer it to the vacant square F.

This is like going straight to the heart of the problem. Yes, without doing this, the riddle cannot be solved at all. Isn't it?

I remember this MUST-DO GOAL and go ahead planning how to achieve the goal. So I MUST UNDERSTAND MORE ABOUT HOW TO EXPOSE AN INTERMEDIATE DISC.

First I take a simple example: how do I expose the disc number 3?

This leads me to the important realization that,

Conclusion 3: At any stage the number of empty squares are very valuable for placing either single or multiple discs. In short, I can manipulate the discs more easily, the more empty squares I have.

And it immediately raises the question,

Question: Can I use square F also in the beginning to spread out and manipulate the discs?

When I mull over this important question, I realize that nothing stops me to use all empty squares including square F for my disc placements TILL THE POINT I NEED TO PLACE DISC 15 IN SQUARE F.

Conclusion 4: It is not necessary to keep the square F unused and vacant for the final pile at all stages throughout. At the right moment I will ensure that it is empty for receiving disc 15.

Conclusion 5: I will use in the beginning all 5 empty squares for placing discs as I need to.

You see, number of vacant squares is a very valuable asset. If I had as many vacant squares I needed, I would have spread out all the 15 discs one each in one square and then would have lazily remade the pile in square Z, say.

That's not to be. Naturally.

So I set down to decide on my first moves with the realizations I have gained till now.

I have to take out first disc 1 and disc 2 and place the two say, in square F and square E. Why disc 1 in square F?

The reason forms part of a small strategy:

I continue to remove the disc 3, disc 4 and disc 5 to place them in squares D, C and B.

Observe my strategy of selection of squares for placing the discs. I place the highest numbered disc farthest away from square F JUST TO FOLLOW A SYSTEMATIC METHOD.

Now I face the hurdle - I cannot move disc 6.

I have used up every empty square. All squares are now occupied and I cannot take the top disc 6 in the original pile and place it anywhere. All the other single discs are numbered less than 6.

That firms up my next conclusion,

Conclusion 6: So only action to take is to make the squares vacant one by one up to the maximum number possible.

And the only way I can do it is to make a pile of 5 discs numbered 1 to 5 with increasing numbers to the bottom.

The following figure shows the status. 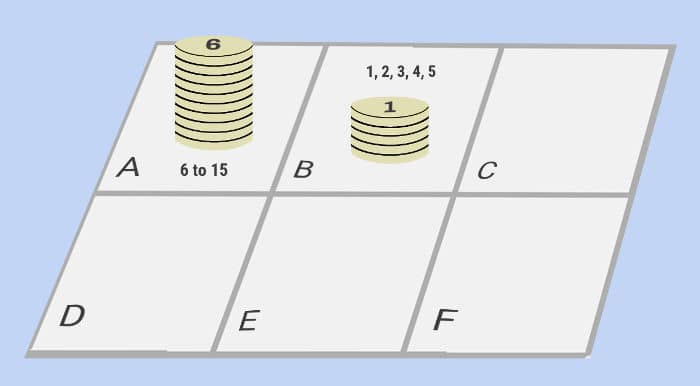 A good progress I feel. What to do next? How to use the four vacant squares.

Answer is easy. I have to use the vacant squares to remove the next group of discs from the main pile to reduce its number of discs further. And I will go on to act this way till I expose the disc 15.

I have formed the first part of my main strategy.

I will make small piles of discs in the empty squares one by one thus exposing disc 15 for transferring it to square F.

Solution to Transfer a pile of 15 numbered discs riddle: Acting on the first part of strategy to make disc piles of 4, 3 and 2 discs

I have already formed a 5 disc pile in square A.

Now I see clearly all the steps to expose disc 15.

I feel I am nearing the end of the first part of my solution, that is exposing disc 15, and stop for a moment to take stock.

Two squares E and F are vacant. This is shown in figure below. 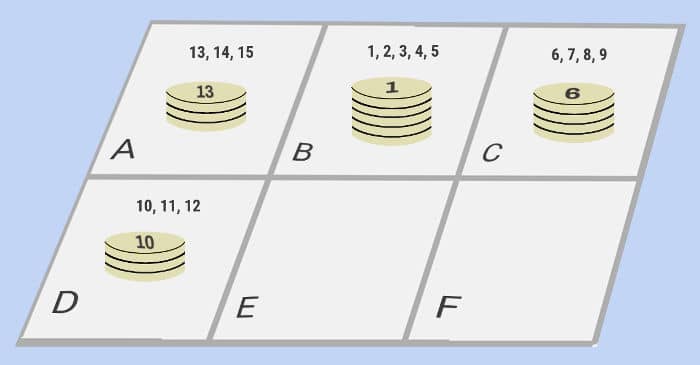 What to do next?

Simple. Just place 13 in square F and 14 in square E. Then transfer 13 on 14 to make a two disc pile in square E and also vacate square F.

Disc 15 is waiting alone in square A.

Solution to Transfer a pile of 15 numbered discs riddle: Forming and implementing second part of my strategy to build the new pile in square F

Transfer the disc 15 exposed and lying alone in square A to square F vacating square A.

This single vacant square gives me breathing room so to say to make my next moves.

Till now I have not used any move that is not needed.

Now it is time to make the new pile by breaking up each pile one by one and adding the discs thus spread out to the new pile in square F. This is the second part of my strategy.

Second part of my strategy: Breaking up each pile starting from 2 disc pile then 3 disc pile and so on to enlarge final pile in square F

The following figure shows this status. 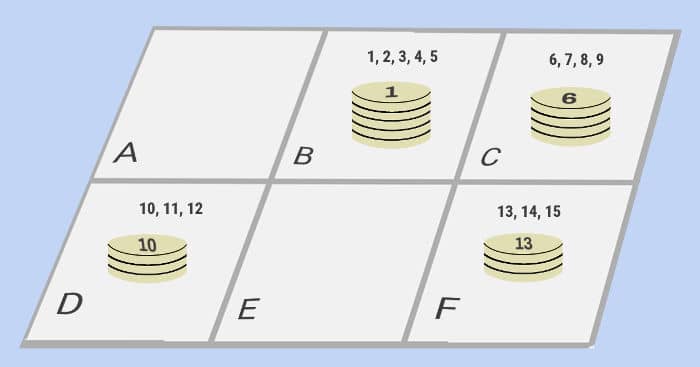 That's the beauty of the riddle. Squares are falling vacant as I need them.

Next step is clear.

I will now break up the 3 disc pile of 10, 11 and 12 and add these three in correct order to the new growing pile in square F.

The status is shown below. 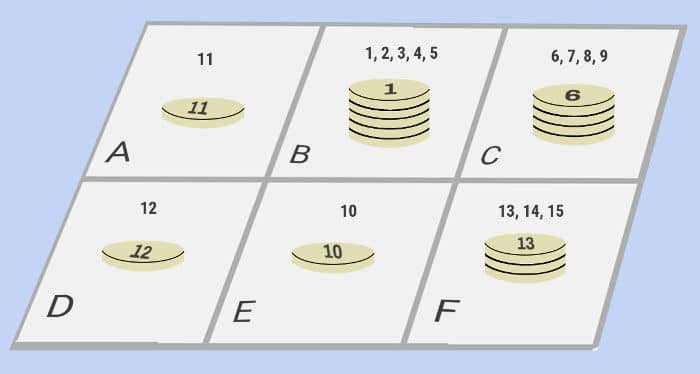 Break up the 4 disc pile of 6, 7, 8 and 9 by placing 6, 7, and 8 in the three empty squares. And add the four discs one by in proper order to the top of the new pile in square F. In the process, four squares fall vacant.

It remains to add these 5 discs one by one on top of the new pile in square F in proper order. 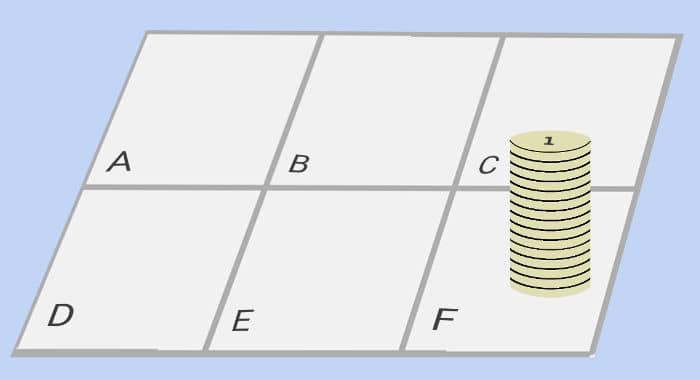 Riddle is solved without much trouble, but are you sure I have solved it in minimum number of steps?

Can you solve it in fewer steps?

Puzzles you may enjoy

Riddle of PROBLEMSOLVING - Creation and application of Repetition pattern based technique

Airplane riddle of flying around the world

Riddle of lying and truth-telling twins

Two jugs riddle of delivering 1 quart of milk each

How could Sonia sell half a poodle riddle

Monkey and the coconuts puzzle with solutions

Three squares in a triangle puzzle

9 squares in a rectangle math puzzle

How many addition signs needed to make sum of 99

Method based solution to Einstein's logic analysis puzzle, whose fish

How to solve Einstein's puzzle whose fish confidently, improved method based solution

Logic puzzle, When is Cheryl's birthday

Liar and truth-teller riddle with step by step easy solution

Farmer with fox, goose and bag of corn crossing the river puzzle

Find the heavier among 8 identical balls in 2 weighing puzzle

Solution to 6 triangles to 5 triangles in 2 moves, first matchstick puzzle

Matchstick puzzle, Turn around the fish in 3 moves

Move 4 to turn the tower upside down Matchstick puzzle