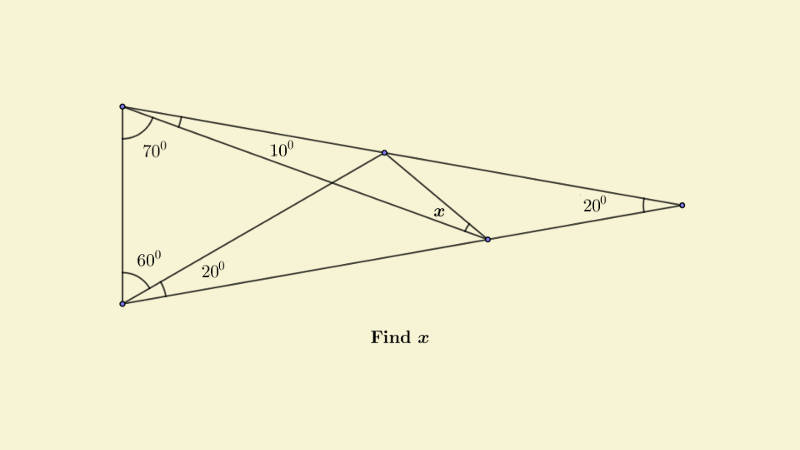 There is no time limit for solving the puzzle.

Give your best efforts to solve it. It would surely be engaging and entertaining.

A variation of this geometry problem reportedly was first presented by mathematician Edward Mann Langley as far back as 1922 in a book Langley's Adventitious Angles (ref. Wikipedia).

This particular hardest easy geometry problem appeared much later, and we classify this problem as a puzzle because of its apparent visual simplicity and layers of inbuilt difficulty.

This should engage and entertain minds of the young and not so young for many more years to come.

This puzzle, though hard, can surprisingly be solved using just the basic geometry concepts that most class X school students know and is one of the most entertaining math puzzles.

If you apply analytical reasoning and geometry problem solving techniques in addition, increased pleasure and deeper understanding of the solution would be your gain.

Our focus is not exactly on the solution, but mainly on the process of thinking that would lead us systematically through the steps to the solution.

The reason behind taking every action for solution should make sense, that's the aim.

Our driving interest in such a rich puzzle always is,

How the solution can be reached systematically using analysis of the problem structure and finding promising reasonable actions towards solution.

This analytical systematic approach automatically produces the solution faster and in fewer steps than usual approaches with the great additional benefit of deeper understanding.

This is Systematic Problem Solving Approach.

Enough of vague and abstract talks, let's get down to solving.

Let us put the required labels such as A, B, C and see the puzzle again.

It is easy to evaluate many of the angle values quickly. Do that. We have also done it taking a few minutes. This is called Initial exploratory trial.

The angle values we get are,

Go ahead, jot down the angle values. These may not all be used in the final solution, but you would know up to which point you could reach easily. And more importantly you would meet the first bottleneck that would say, this far and no further.

Till now we have used only one geometry concept,

Yes, of course, now we can discover the most important and useful pattern till this point of time,

This is the first key pattern identification.

This is natural as the puzzle is hard.

In such a puzzle, unless we introduce new elements in the given puzzle figure, the deadlock cannot be broken.

At the end of this first stage and initial exploratory trial and key pattern discovery, we discover the second key pattern,

Now that we have experienced the difficulty in solving the puzzle, we would naturally ask ourselves,

What is the main reason behind this difficulty?

Answer lies in asymmetry of the target triangle.

The $\angle x$ is formed as a part of $\triangle DES$ that lies inside the larger $\triangle ABC$ ASYMMETRICALLY, and that has created all the difficulties. We are not able to evaluate the desired elements of this asymmetric triangle from other known angle values in the larger triangle.

A general truth in solving geometry puzzles is,

Unless we can use the concepts that are based on symmetric or equivalent shapes, we won't be able to solve a hard geometry puzzle. This is what we call principle of symmetry in shapes.

The reason lies behind the characteristics of the geometry concepts that we can use as problem solving resources.

In this case of a puzzle involving triangles, the concepts that we can possibly use for solving the problem are,

There are other more advanced concept based properties of triangles, but first,

We must use the most basic concept based properties in a problem domain. In most cases that would give us the simplest and quickest solution.

Based on all these analysis, we have finally made up our mind about the most important problem solving resource to target,

As the problematic angle location is asymmetric, the most promising concept based pattern should be a pair of similar triangles.

If we attempt this, all three angles of $\triangle BAE$ being known and $\angle A$ being twice the $\angle ABE$, the big advantages would be,

How to create such a new similar triangle?

That is also easy.

But let us first see the more complete diagram.

To create a second triangle similar to $\triangle BAE$,

Not surprisingly, AF intersects CD at F, creating an equilateral $\triangle BFC$ and $\angle ABF$ becomes equal to $20^0$, which is the value of $\angle BAE$.

Essentially, we have balanced out the asymmetry by introducing necessary and additional symmetry. This is asymmetry balancing technique that seems to be a quite in the clouds concept.

Why does an angle bisector create so much symmetry and new problem solving resources in this case?

Natural outcome because of the symmetry introduced by the angle bisector AF will be creation of an equilateral triangle $\triangle BFC$,

All in all, this is the most important new set of elements we have introduced in the problem figure.

Okay, all these are just analysis of the internal anatomy of the geometry problem. But the immediate question is,

What should we do with this increased symmetry?

As it is easily visible now, let us increase the amount of symmetry further by identifying a second equilateral $\triangle DFG$. This should be helpful as we would be moving towards the problematic zone. This is the always effective abstract technique of increasing symmetry.

At this point, a wealth of problem solving resources in the form of a second equilateral triangle and a pair of similar triangles are available. Though lightly hidden, the path to the solution is clearly visible.

Final steps to the solution

Let us assert the steps to the solution. We'll collect all new conclusions from starting point together to present the whole picture.

We will now establish $DG||BC$.

$\triangle CDB \cong \triangle BGC$ as all angles are equal with side BC common,

Again as all corresponding pairs angles are equal with side BC common,

So, in isosceles $\triangle ABG$,

So, in $\triangle DGE$, as $EG=DG$, it is isosceles with its two base angles equal to each other.

The solution schematic is shown below,

There are more ways to solve this puzzle and this solution is among the simplest.

Overall, this puzzle problem should be considered as a source of puzzle solving excitement as well as a valuable piece of geometry problem rich with teaching potential for young school students anywhere.

This is a rich problem to solve.

Try out on your own for new solutions.

Puzzles you may enjoy

Monkey and the coconuts puzzle with solutions

Method based solution to Einstein's logic analysis puzzle, whose fish

How to solve Einstein's puzzle whose fish confidently, improved method based solution

Liar and truth-teller riddle with step by step easy solution

https://suresolv.com/brain-teaser/logic-puzzle-when-cheryls-birthday">Logic puzzle, When is Cheryl's birthday

Farmer with fox, goose and bag of corn crossing the river puzzle

Find the heavier among 8 identical balls in 2 weighing puzzle

Solution to 6 triangles to 5 triangles in 2 moves, first matchstick puzzle

Matchstick puzzle, Turn around the fish in 3 moves