Pranab, a few years younger to me, is a close friend of mine. When I dropped in to see him that day, he and his wife Aditi were intently discussing something with a middle-aged man of business. Quietly I took up my seat.

After the guest left, Pranab explained in brief.

His 15 year old washing machine developed a fault and this person will accompany them next day to purchase a new machine from a large shop already identified.

A strip of metal in the bottom part of the machine gave way due to rust and the machine started sagging. It is not usable any more.

He said with a hint of sadness, “The fault is such a minor one. I got an estimate for repair from the company representative. The cost would be about Rs.3000. It is too high. Better to replace it. I was told that a new similar machine will cost roundabout Rs.8000, within my budget.”

I expressed my surprise, “So much for replacing a strip of metal in the body!”, and explored further, “What about the internal parts? Are those okay?” Pranab confirmed, “Yes, the company mechanic had examined. Nothing wrong internally.”

I sympathized with him silently, but didn’t go into the problem further. Spending more than 30% of the cost of a new machine for repairing an old machine is not justified at all.

Analysis of the first stage events

On the first day, the process of problem solving was at the first stage and Pranab and Aditi, the problem owners, must have considered the financial aspects when taking the decision for replacement after evaluating the other choice of repair and finding it unacceptable.

Furthermore, they had already made an arrangement with a third person and, it is generally true that most people like to have a new machine to replace an old one.

It was their subjective choice. I didn’t feel strongly enough to move into the problem domain further and left it at that.

In such a case though, repair is my first choice.

About ten years back my first inclination was also to get a new thing to replace the faulty one. But after a deep experience I learned that in most situations, it is possible to convert a seemingly infeasible situation of repair to a feasible one.

In this case, I had to check myself, as the decision to buy or repair was a personal one, and also the repair option had been explored.

I was in agreement with the reason of rejection of repair option. I knew the cost of a new machine my friend chose, to be actually about Rs.8000. Expending more than 30% of this new machine cost on repair should certainly be considered as unacceptable.

Estimation is a necessary skill in good decision making.

Two days later I was with them again. My first question was, “Did you buy the new machine?”

I understood that my friend couldn’t accept the large deviation in the cost estimate made by his purchase advisor a few days back. The man failed him badly. My friend is now angry and stalled to inaction.

I felt a surge of sympathy towards him.

When I looked back later, I understood that this emotional connection was the point at which I got involved.

Formalism: In a problem solving process, the problem owners are the sufferers from the adverse effects of the problem and have the authority to take any decision. The problem solver, if an outsider, must be invited or must have enough emotional involvement for taking up solving the problem.

Formalism demands, excluding exceptional cases, an outside problem solver should never exercise the option to take any decision on behalf of the problem owners. He is the decision analyst to aid the problem owners to take the right actions that would result in an efficient least cost solution. He would act as an enabler and a catalyst, and not as a decision maker.

But on the second day situation had changed. From the standpoint of the problem solver,

Now I was involved emotionally with the problem. As it usually happens in this third stage of problem solving, things get serious. The problem solver starts pushing ahead relentlessly till the problem is solved to the satisfaction of all concerned.

Questioning and exploring to know more about the problem, little details count

My first question to Pranab was, “Tell me more about the nature of the fault.”

Pranab explained again, “The machine is more than 15 years old but was running perfectly well till it developed the fault. I know it is a minor fault only on the body with the internal mechanisms all right, but what to do. Repair cost is so much!”

I analyzed the situation till now,

Machines of old times usually were built for running over many years. It should still serve them well for a few years more, if only the minor body damage could be repaired at a reasonable cost.

That was the point of breakthrough.

I told Pranab, “Look, we should now find a reliable body repair man. It should be a simple job for such a person. Do you know any good car repair workshop?"

The man who would finally do the repair should be their man, trusted by them. If I chose the repair man, he would be a third party, and second party performance usually would be much closer to efficient solution compared to a third party.

The goal changed from relying on an already failed washing machine mechanic to finding a body repair mechanic.

This was a simple act of domain mapping using abstraction. The nature of fault was generalized to body repair, detaching it from the domain of washing machines. Thus we were now on the lookout for a reliable mechanic in the more general higher layer domain of metal body repair. Under metal body repair domain, the sub-domain of car body repair was the first one that came to mind.

We have mapped the fault from one domain to another. The following represents the mapping activity through abstraction and deductive reasoning, 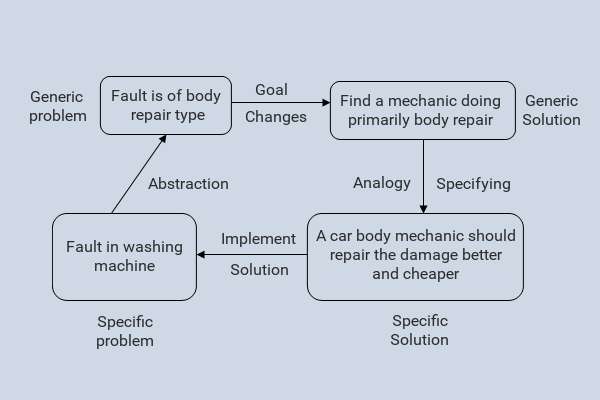 With sudden change of focus and new possibilities opening up, both Pranab and Aditi visibly straightened up with brighter faces. Aditi first reacted. She thought aloud looking at Pranab, “Do you remember, once Shyama mentioned her husband working in a car garage?”

I provided the extra push, “Call Shyama now. Let us see what she says.” That is my job,

Pushing people towards right actions, as soon as possible, without leaving it for later.

Aditi promptly made her call. But in a few minutes, we could gather that her quest met with no success.

Till now Pranab was inactive, apparently observing and thinking. Knowing that Pranab’s contacts were much larger in number than his wife’s, I looked at him expectantly and found him already on a call, talking in a low voice.

Aditi's proaction in turn had pushed Pranab into action.

I could clearly see signs of success from the glow in Pranab’s half-smiling face. Finishing his talks, barely suppressing happiness, he informed us that the man he was talking to is one of his nephews and he would send a good mechanic day after tomorrow. The cost would be Rs.1500.

To me the problem was nearly solved at that point.

Lots achieved in a short time. The problem was virtually solved.

But, the last step still to be taken. The body damage is to be actually repaired satisfactorily without any new problem.

For me though, no further action remained, apart from waiting for two days to see the result.

Coming home, into work, I forgot the whole matter.

Pranab briefed me, “My nephew sent a man a day late, but finally the work has been done today morning. When we started the machine after repair, there was a noise. Something got loose inside. He opened the machine and tightened up the loose part. Now it works fine. And do you know, he charged only Rs.1200, not even Rs.1500. He told me, such high quality motors you won’t get nowadays.”

Yes, that was the closure, acceptable to us all.

I thought, again this has been a case of the problem owner solving his problem himself.

Nearly always I have found with a little surprise,

The solution rests with the problem owner himself.