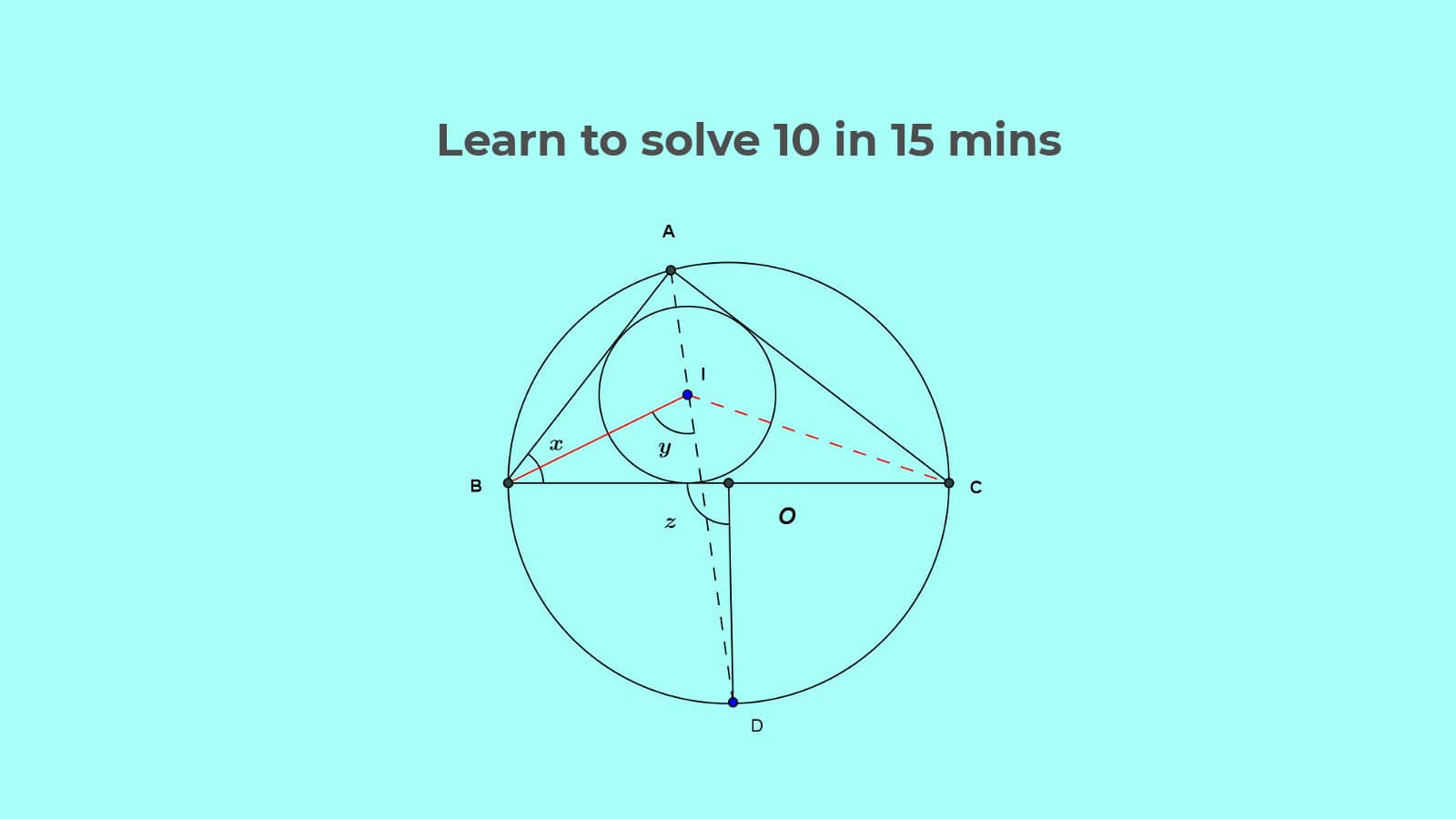 Quick solutions to difficult circle geometry and other geometry problems

For greatest benefits take the test first at,

The following figure describes the problem,

We have used problem breakdown technique in dividing the problem into two parts, first showing $AC \bot CF$ and then $ED || AC$ so that final result obtained is surely $ED \bot CF$.

After showing triangle congruency we can just superimpose $\triangle EAD$ on $\triangle ABC$ matching vertices so that ED merges with AC and automatically becomes perpendicular to CF. By this logic you can bypass showing line parallelism, a small step though. This is use of Many ways technique.

This action of translation or moving of $\triangle EAD$ so that it is placed exactly on top of $\triangle ABC$ is a powerful technique of problem solving in Geometry. Depending on the situation you may discover useful result bearing such movement (which may be a rotation) of a line, an arc, a chord or a closed regular shape that quickly gives you the solution. Visualization skills, geometric conceptual maturity and intelligent practice is needed to be able to detect such possibilities. We name this technique as, Geometric object movement technique.

Note: This is a rich problem with many possibilities of solution paths. You should try out for more solution paths and evaluate the efficiency of different solutions to get a deeper insight into the concepts involved. Using rhombus diagonals properties is one promising alternative.

Lastly, the perpendicularity condition means that the angle between two lines in direct intersection, in extended form or in parallely moved form is $90^0$.

To actually see that $ED \bot CF$ just extend FC and ED to intersect each other at P. The following figure shows the situation. This is the extended form of perpendicularity.

In a quadrilateral ABCD with unequal sides if the diagonals AC and BD intersect at right angles then,

The relevant figure is shown below. 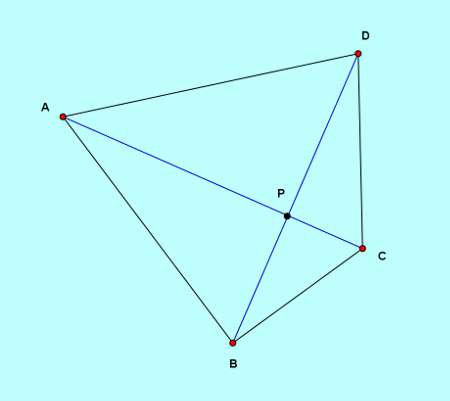 Subtracting the second from the first we eliminate PB and PD,

The first thing that occurred to us is, if we translate point D down towards P along DP, the problem definition is not affected at all but adjacent sides AD and CD gets smaller and smaller with respect to the corresponding adjacent sides AB and BC and so, option 1 and 2 won't be valid in general.

Similarly when we translate point A down towards point P along AP adjacent sides AB and AD gets gradually smaller in comparison to BC and CD, making the option 4 invalid in general leaving only option 3 which sums up squares of opposite sides not adjacent sides.

This is purely conceptual reasoning using Geometric object movement technique and is the first step of deductive reasoning.

In the second step we look for the way to be sure of our conjecture.

The quadrilateral is not a special one such as cyclic quadrilateral leaving the only way to proceed is to use Pythagoras theorem in two pairs of right triangles. Being experienced in Algebra, visualizing the way to eliminate the common elements was easy.

The problem is depicted in the figure below. 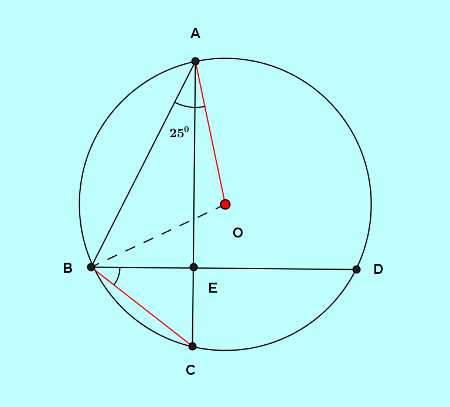 The two chords AC and BD intersect perpendicularly at E so that $\angle OAB=25^0$. As radii OA=OB, in isosceles $\triangle OAB$,

And the third angle in the same triangle will be,

This is the angle held by the arc AB at the centre and so by arc angle subtending concept it will be twice the $\angle ACB$ at C on the complementary arc. So,

The following figure depicts the given problem. 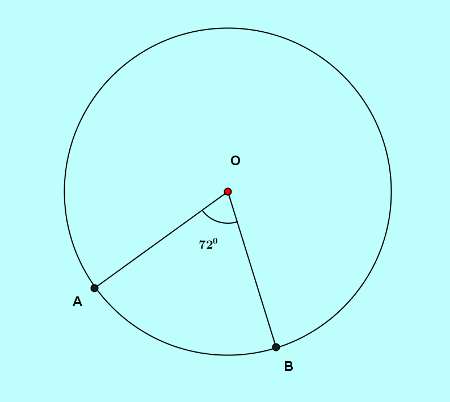 Fact is, the whole of the circle circumference of length $2\pi{r}$, where $r$ is the radius, holds a total angle of $360^0$ at the centre. So what would be the proportion of the circumference or length of arc that would hold angle of $72^0$ at the centre? It is a simple case of using unitary method, but we detect that $72^0$ is one-fifth of $360^0$ and so the desired length of the arc would simply be,

A circle with centre at O touches two intersecting lines AX and BY. The two points of contact A and B subtend and angle of $65^0$ at any point C on the major arc of the circle. If P is the point of intersection of the two lines, then the measure of $\angle APO$ is,

The figure depicting the problem is shown below. 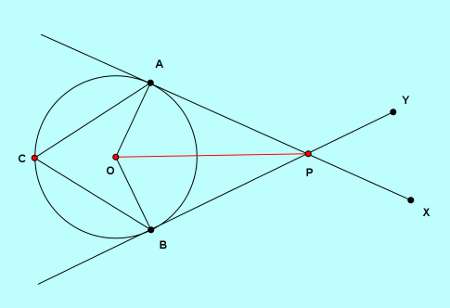 Now tangents AX and BY intersecting at P with tangent points A and B, the two right triangles $\triangle APO$ and $\triangle BPO$ are congruent. This is because, in addition to common side OP, also the radii OA = OB so that the third side is also equal by Pythagoras theorem in the right triangles (as radius to the tangent point is always perpendicular to the tangent). It means the line OP bisects the angles $\angle AOB$ and $\angle APB$.

Chords AB and CD of a circle intersect at E and are perpendicular to each other. Segments AE, EB and ED are of lengths 2 cm, 6 cm and 3 cm respectively. Then the length of the diameter is,

The following figure represents the problem. AB and CD are the chords and O is the centre of the circle. 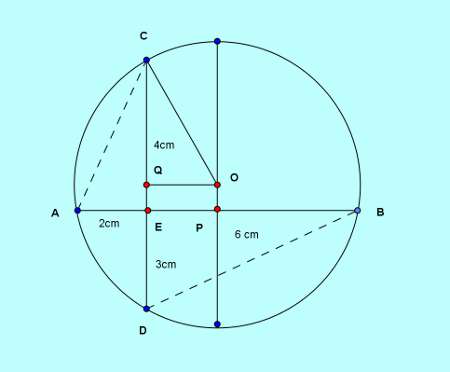 We have drawn the diameter parallel to the chord CD for convenience of getting many perpendiculars so that section lengths can be easily calculated in rectangles formed.

Using problem breakdown technique in the first step we will find out the length of unknown fourth part, that is, length of EC.

We know that the intersected chords form two similar triangles, $\triangle ACE$ and $\triangle BDE$, as in addition to the right angle, the angles held by the arc AD are also same. As a result ratio of corresponding sides of similar triangles being same we have,

At the second stage now we will use the concept of chord bisection by perpendicular from centre O. Thus half length of the chords,

So finally in the right $\triangle CQO$, length of the radius is given by,

I and O are the incentre and circumcentre of $\triangle ABC$ respectively. The line AI produced intersects the circumcircle at point D. If $\angle ABC=x^0$, $\angle BID = y^0$ and $\angle BOD = z^0$, then $\displaystyle\frac{z+x}{y}$ is,

The following figure describes the problem. 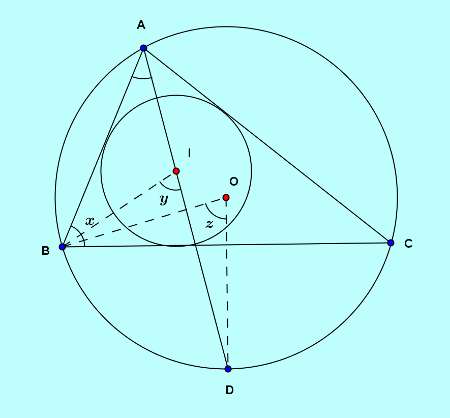 The very first thing we notice is, $\angle BAD$ being the angle held by the arc BD at the point A on the complementary arc, it will be equal to half of the $\angle BOD$ held by the same arc at the centre which is $\angle z$. By this observation then,

Also BI being the bisector of the $\angle B$ we have,

Now it remains to relate the third angle by observing that it is the external angle to the $\triangle BIA$ with half of the first two angles as opposite internal angles. So,

Key concepts used: Deductive reasoning regarding how to bring all three angles in the same platform so that we can sum them up -- the result of analysis is to use arc angle subtending concept to transform $\angle z$ to an angle on the periphery of the larger circle and simultaneously as an angle of a triangle in which $\angle x$ already is present in halved form -- use of incentre concept -- the last step is to detect that the $\angle y$ is the external angle to the triangle in which we have already positioned the other two half angles as opposite angles -- use of external angle of triangle property.

The radius of two concentric circles are 17 cm and 10 cm. A straight line ABCD intersects the larger circle at A and D and the smaller circle B and C. If BC = 12 cm, then the length of AD is,

The following is a depiction of the problem graphically.

As the two circles are concentric, the common perpendicular from the centre bisects the two chords AD and BC.

In right $\triangle BPO$ then,

Finally then in right $\triangle APO$,

Two circles intersect at A and B. P is a point on produced BA. PT and PQ are tangents to the circles. The relation between PT and PQ is, 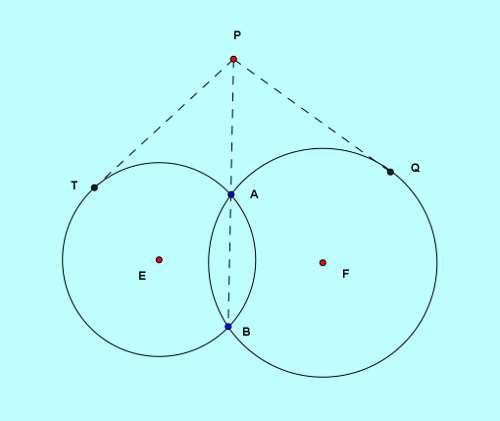 The technique of seeing the key formation that will lead you to the solution in geometry problems is to draw only the elements that are just necessary. Don't draw anything extra in the beginning. This is minimal geometry drawing technique. In uncluttered formation it is usually easier to see through the problem.

Then try to figure out the path to the problem solution from the given portion of the figure. At this point try to visualize which concept will relate the given information to the end state of the solution. It may just be in one step or in a number of steps. Now only you draw the elements that were absent but that were crucial to solving the problem by showing you clearly the key relationship.

Here as we looked at the bare bones figure above, immediately it reminded us of the secant of a tangent concept that we have discussed in Basic and rich concepts Geometry 3 Circles. This is a powerful rich concept that relates tangent intercept from an external point to segments of a line cutting through the circle.

More specifically using secant of a tangent concept we have for the smaller circle,

Note: By deductive reasoning though we were sure of the answer in the very beginning without being aware of the reasons behind the solution. The logic of this conviction is, the relation must be independent of the relative size of the circles. Only equality condition satisfied that condition.

You may refer to the secant of a tangent concept in brief below or in a bit more details in our tutorial session Basic and rich concepts Geometry 3 Circles. 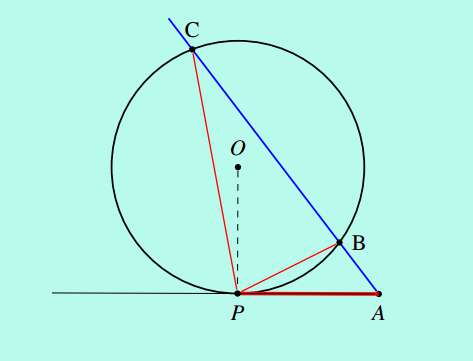 In two triangles $\triangle APB$ and $\triangle APC$, $\angle A$ is common and $\angle APB=\angle BCP=\angle ACP$. This again is another rich concept derived from VERY IMPORTANT arc angle subtending concept and explained in tutorial Basic and rich concepts Geometry 3.

Thus two angles being equal, third pair of angles are also equal and the two triangles are similar. In similar triangles corresponding side ratios are equal so that,

The following is the figure relevant to the problem. 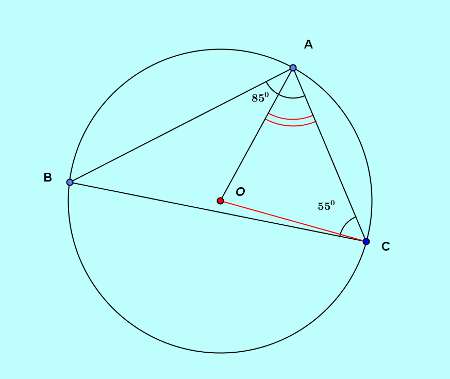 This is an example of analyzing the given bare bones figure to discover how to reach the solution end state from the given initial state, identifying the steps connecting the two stages and drawing a single missing element radius OC.

In $\triangle ABC$ the third angle,

Again in $\triangle AOC$, radii AO=OC and the triangle is isosceles so that two base angles are equal. Thus,

Recommendation: First try to use the most basic concepts. If unable to get the solution then only use rich concepts. Basic concepts usually result in quick solution.

Guided help on Geometry in Suresolv

To get the best results out of the extensive range of articles of tutorials, questions and solutions on Geometry in Suresolv, follow the guide,

The guide list of articles includes ALL articles on Geometry and relevant topics in Suresolv and is up-to-date.