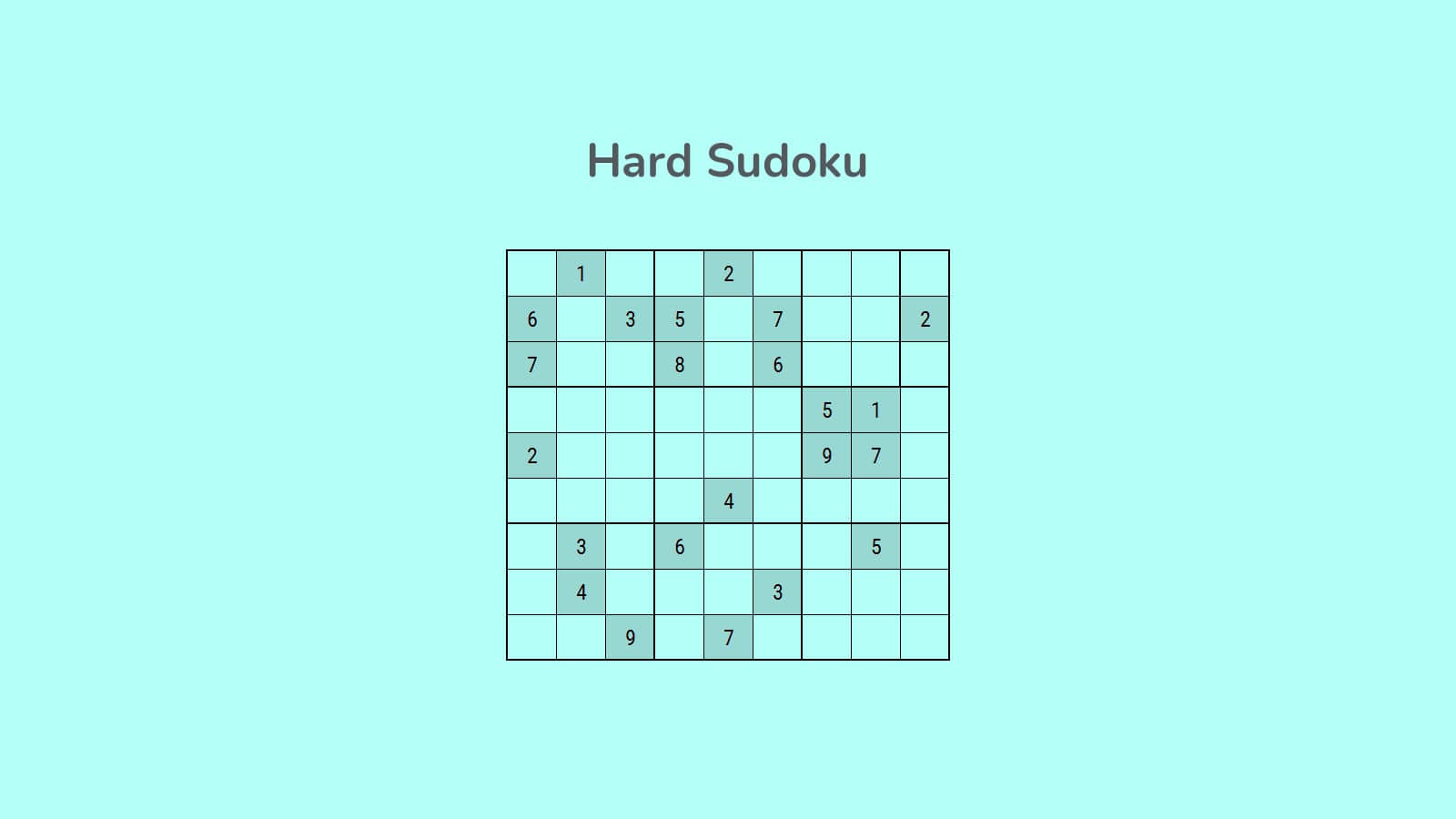 New York Times Sudoku Hard, 16 February, 2021 solved in four stages explaining all breakthroughs and how those are achieved by advanced Sudoku techniques. 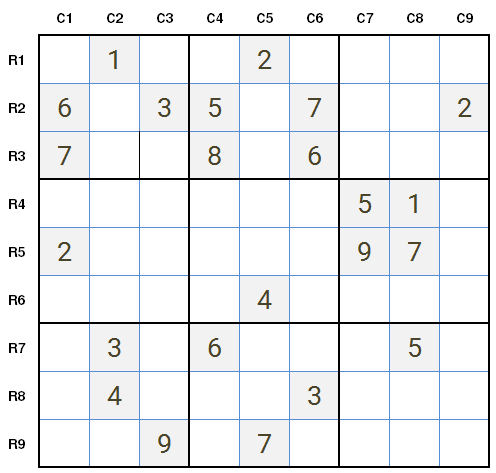 None of the digits could produce any success of valid cell by row column scan. This is the hallmark of a truly Sudoku hard puzzle game.

So we'll next start evaluating 2 or 3 digit possible digit subsets DSs in promising cells with many existing digits in the three interacting zones.

By this reduction of DSs of the affected zones, a Cycle reduces overall uncertainty in the game and often helps to produce a breakthrough.

Below section explains in a bit of detail the process of enumerating digits possible in a cell. To skip the section, click here.

Reducing labor being an important objective, don't enumerate 5-digit possibilities or enumerate possible digits for ALL the cells.

Select relatively more promising cells in a row, a column or a 9 cell major square (each a zone) to evaluate the smallest length of possible digits in the cells first. Target is to get two-digit possibilities first.

Take cell R9C4. It is in three zones or areas - row R9, column C4 and bottom middle major square. Unique set of digits in all these three together are,

Set union is technical, but this we do by common sense and do naturally. Eliminate repeated digits when considering digits of two or three zones together.

So only the two digits (2, 4) are valid in cell R9C4. This is the possible digit subset or DS in the cell.

Once a few cells are enumerated in a zone, enumerating the rest gets easier.

Stop in a 9 cell major square when the rest of the empty cells would all have possible digits 5 or more.

Three reasons why you should stop,

Digit possibilities for empty cells are enumerated ONLY WHEN NECESSARY.

For example, if you get a useful pattern and a hit after enumerating possible digits for just a few cells, continue exploring the hit to get further hits leaving enumeration behind for the time being.

Reason is simple: With more number of cells filled up, cell digit possibilities get shorter and getting them easier.

Using the reductions caused by this Cycle next we form the DS [4,9] in R1C1 and another [4,9] in R1C6 in the promising zone top middle major square with as many as 5 digits filled.

This second Cycle (4,9) gives us our first breakthrough. Let's see how.

Rest of the two digits [3,6] form yet another Cycle (3,6) in cells R5C5, R5C6 that are in C5 as well as in the parent central middle major square. As a result we get the next valid cell R5C4 1 by possible digit analysis DSA on the cell.

Evaluating a few short length 2 digit DSs in promising cells we close the stage here. For ease of understanding we have also preserved the Cycle (1,5,8) which would give us three valid cells.

See how the allowed cells for 1 are reduced to a single cell by the scan indicated by arrows.

How a Single Digit Lock is formed and its effect

An effective single digit lock is formed by scan for the digit on a row, column or usually by a cross-scan of row and column. In such a single digit lock on 1 in this game, the digit 1 can appear in the final solution only in either of these two cells in column C7.

A single digit lock creates a breakthrough either by reducing a critical digit from the DS of a cell or as in this case, by participating in a row column scan for the digit. 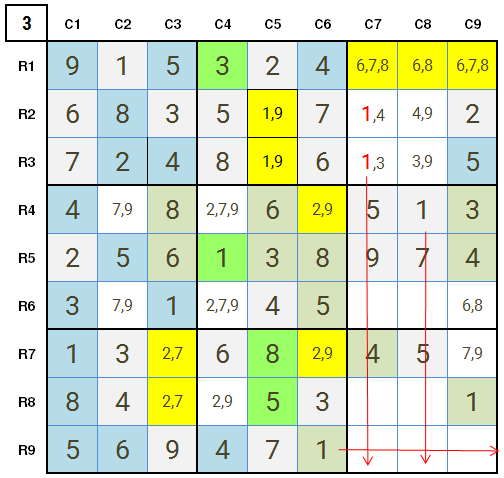 An often asked questions is, "What makes a Sudoku puzzle hard?"

There is no metric or measurement to decide for sure that a Sudoku puzzle is hard, or not so hard.

Nevertheless, a distinction between hard, medium and easy Sudoku categories can be made.

As a ball-park figure, any Sudoku puzzle having number of filled up cells 27 and below should be taken as hard or extremely hard.

In medium or easy Sudoku puzzles, number of filled up cells will be more. In easy ones it can be 36 or more.

These are rough figures drawn from experience.

This NY Times Sudoku puzzle is just-so hard with as low as 23 filled cells.

For full enjoyment, avoid looking into any solution as well as the answer.

The joy of discoveries will then all be yours.

Other Sudoku puzzles you may like to go through at leisure

You may read through all medium level 2 solutions at Second level medium Sudoku.