This is the second game play at second level Sudoku. You should find it a bit harder to solve.

The most basic technique of row column scan for finding a valid cell won't be enough any more. After proceeding a few steps by using row column scan, you will find suddenly that you are no longer able to proceed further.

This is the point where we have to devise new techniques for finding a valid cell based on new logic of pattern analysis.

This is the hallmark of Sudoku game.

As you try to solve increasingly difficult Sudoku problems, you need to create and use more sophisticated pattern analysis techniques.

We will keep open the option for you to devise your own techniques to solve the game. You may solve the game on your own and check the solution given at the end of the session. If you are stuck, you may refer to our step by step solution process.

Or, you may decide to learn the new techniques straightaway from our detailed solution. 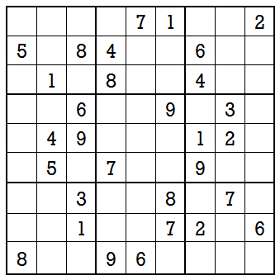 It simply means, there won't be many friendly digits waiting for you to easily form a scan pattern and pinpoint a valid cell. You have to work more intelligently and use more complex techniques to find a valid cell.

Here we will leave you with the game to solve yourself or go forward with our solution.

Solution process of the second Sudoku game at hardness level 2

To start with we will repeat the very brief Sudoku concepts under Aside 1 and Aside 2. If you are already comfortable in playing easy Sudoku, you may skip these two sections.

A Sudoku game board of 81 square cells comes with a few of the cells already filled up with valid digits 1 to 9. The objective of the game is to fill up rest of the empty cells following the basic Sudoku rule of NOT using any of the digits 1 to 9 more than once in any row, column or 9-cell square (identified by thick borders, there are 9 such 9-cell squares).

At each step when we locate a valid cell where we can put one and only one digit, we will identify the cell by its row number (R1 to R9) suffixed by column number (C1 to C9), mention the digit, and mention the column row scan information ( or nothing if the cell happens to be only one empty in the containing row, column or 9-cell square).

If we use a new technique to find the valid cell, we will mention the type of technique and if needed will explain it in more details. Sometimes we will add a remark.

The only objective at each step is to find a cell in which one and only one digit can be placed. This is what we call a valid cell.

We would repeat the definition of valid digit and the valid cell.

We define a VALID digit as the digit you put in an empty cell so that,

It is the only possible digit which you can put in the cell following the rules of the game.

As before, the most important objective is, how to find out the cell in which you can put one and only one digit out of the digits 1 to 9.

We have used the most basic technique of row column sweep or horizontal-vertical cross-scanning mainly. We have used Exclusion technique wherever we found it possible.

We used the concept of a favorable zone as a column or a row or a 9-cell square with high digit occupancy so the number of digits possible to fill up the empty cells in the zone is much less and so by eliminating the few other contenders getting only a single digit for a single cell is that much higher. We have also used digits with high occurrence in the board, that is, the favorable digits to our advantage.

For a favorable digit that has appeared, say, in 7 cells out of maximum 9 possible all over the board, finding the rest of the two valid cells for this favorable digit by row-column sweep is generally very easy because of elimination of a large part of the board by its occurrence in most zones.

We will show the game board again for convenience. The following is the Sudoku game we have to solve.

Our strategy will generally be to find a valid cell by row column scan and if it doesn't work then use more powerful techniques. We will stop and explain how a new technique works when we meet it for the first time.

The first step is easy and we get our first three valid cells by scan only. The fourth valid cell we have got by hybrid DSA scan, but it was easy to get. After this quick success we check all digits for any possible valid cell by scan, but without any success. 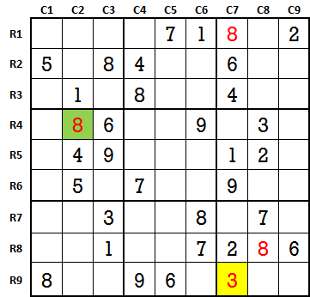 The technique Digit Subset Analysis or DSA in short

For quick success by this technique, we identify a most favorable zone (row, column or a 9-cell square) with highest number of cells filled up so that the possibilities of digits occupying the few empty cells are minimum.

Usually, we get the opportunity to apply this powerful technique quickly on a row or column with 7 cells filled up and only two cells remaining empty. If the empty cells are more than 2, chances of success is less.

In our game such a favorable zone is the column C7. In its three empty cells the three digits 3,5 and 7 are the only possibilities. These three digits form the Digit Subset.

Now we will analyze this digit subset by cross checking each of these three empty cells with the intersecting rows to see whether any two out of the three digits appear in an intersecting row. If so, we can put the third digit in the corresponding cell. This is usual DSA.

But this time, we just scanned two rows having a 3 to eliminate the two intersecting empty cells R7C7 and R5C7 (both containing a 3) in C7 for 3, leaving only one cell R9C7 for 3 in C7. 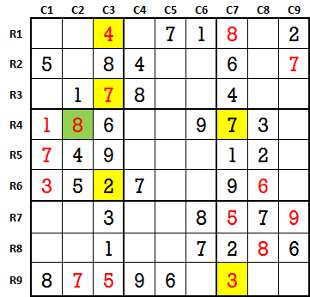 Let's proceed to next stage.

A cycle in a row or column is very effective. If a cycle appears in a 9-cell square but not in one column or row its analysis may not produce immediate results.

We will now introduce a 3 length cycle of (4,5,8) on cells R4C9, R5C9 and R6C9 in column C9. These are the three empty cells in right middle 9-cell square, and (4,5,8) are the remaining digits. These are the only three digits that can and must appear in these three cells.

Fortunately the cycle has appeared in one column C9.

A cycle is a very powerful tool.

At the next stage, this cycle will be used now.

Let's go for the next stage. 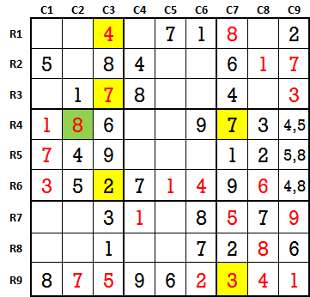 Let's go to the next stage. 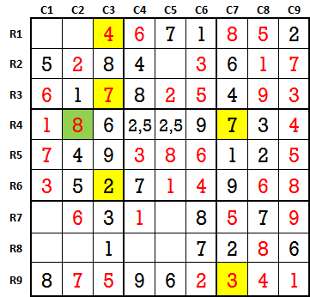 A special note for you

We haven't tried to optimize. So we feel that this more complex game is solvable by following an easier path.

You should try to reach one of the simpler solutions.

Lastly, we leave a game for you to solve.

A game for you to solve

We leave you here with a new game for you to solve. In our next session we will present its solution and another new game.

These Sudoku game solutions are collected from various sources and are found to be interesting. You can get these Sudoku solutions at Interesting Sudoku not classified at any hardness difficulty level.

Links to fourth level Sudoku you will get first at 3rd level game solutions.

It is recommended that without jumping over any of the hardness levels, one should progress through solving higher level Sudoku games strictly step by one step up. For example, you shouldn't play a 4th level Sudoku game without becoming comfortable in solving 3rd level games.