This year would surely bring new lights in your life. Happy new year to you all the time. 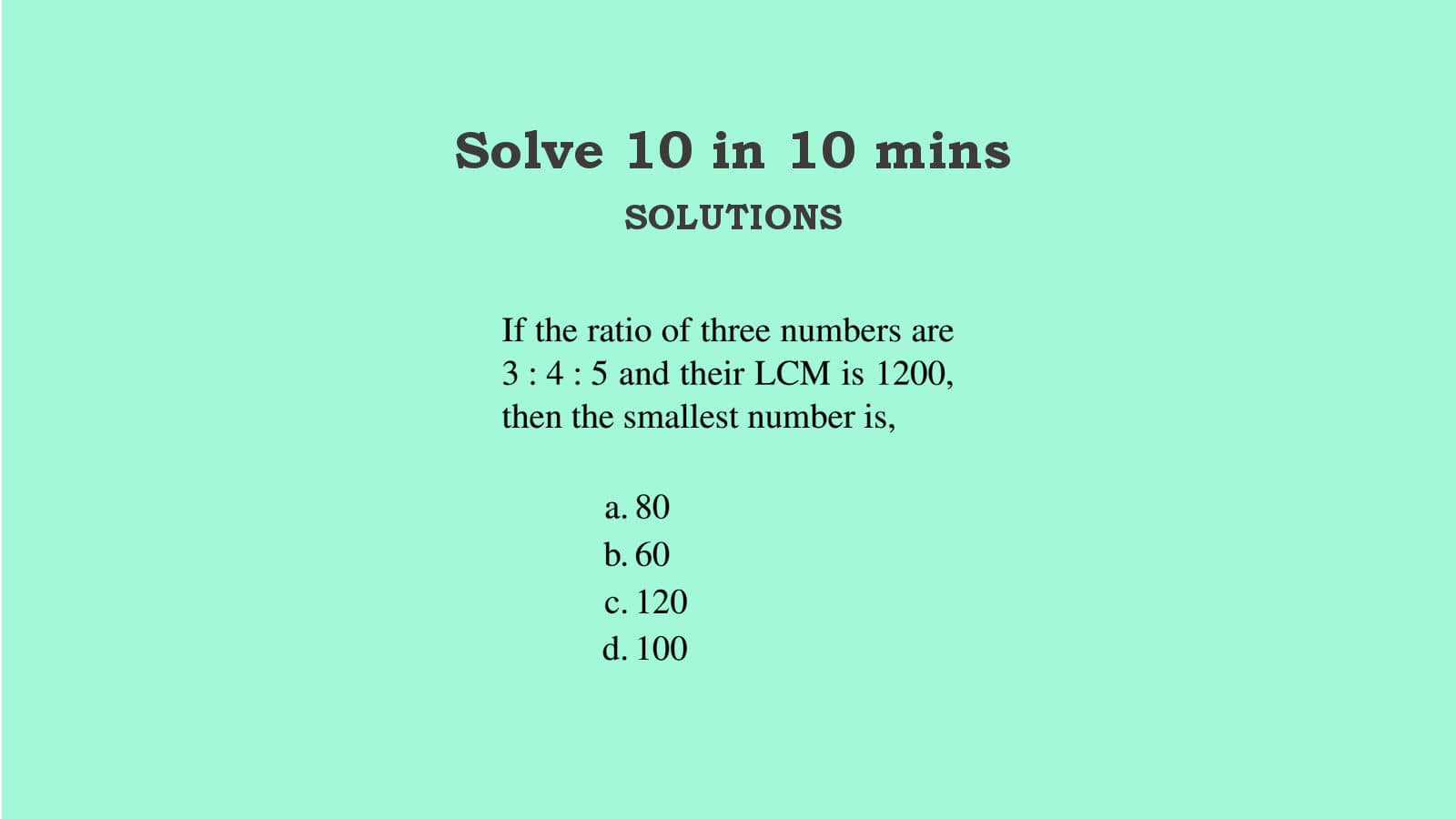 Techniques for quick solution of the questions on ratio, number system, mixture, series, pipes cisterns, fractions, train running, boats rivers should be useful for prelims of other competitive exams also.

To take the test before going through the solutions, click here.

HCF reintroduction technique and concept of HCF and LCM

In LCM, all unique factors of the numbers along with the single factor of HCF will be present.

The other way round, if we divide the LCM by the product of the unique uncommon factors, 60 we get the HCF as 2.

To solve this problem you need clear concept of HCF and LCM.

Remember, when you are forming the product of three unique uncommon factors of the three numbers (without HCF as a factor) there might be a common factor between a pair of these factors. If it is so while forming the LCM dividing product, that common factor is to be taken once only.

For example, LCM of 4, 6 and 8 is 24 and HCF 2. Unique uncommon factors between the three (without HCF factor) seems to be 2 , 3, and 4. But, as first and third has 2 as a common factor, we have to take only one 2 making the dividing product not 24 but 12. Now if we divide the LCM by this product we will get the HCF as 2. This is needed as in LCM no factor of the three numbers can appear more number of times than it appears in any one number.

2 is the highest common factor, the least common multiple is,

If we had included two 7s in LCM it would have violated the basic rules in forming the LCM of a few numbers,

This complication comes only in case of more than two numbers.

Conventional Method: find the LCM of the four numbers and then add 5. It takes some time.

Alternatively, we subtract 5 from each of the choices and do factor test between visibly common factors of the four given numbers and the choice reduced by 5.

First choice result 420 is not also divisible by 9 and so invalid.

1265 must be the answer. Its result 1260 multiple of 9 and 5 as well as 7 and 4. These factor isolation and divisibiltiy test can be done quickly.

All in mind, and faster.

You need to be proficient in mentally identifying commonly used factors of 2, 3, 4, 5, 7 and 9 in numbers. Efficient divisibility rules help.

Divisibility rule for 2 as a factor: number must be even.

Divisibility rule for 4 as a factor: last two digits of the number must be divisible by 4.

Divisibility rule for 8 as a factor: last three digits of the number must be divisible by 8.

Divisibility rule for 3 as a factor: Integer sum or sum of digits of the number must be divisible by 3.

Divisibility rule for 9 as a factor: Integer sum or sum of digits of the number must be divisible by 9.

Divisibility rule for 5 as a factor: last digit of the number must be 5 or 0.

Factor identification of 7: Recommendation: directly divide by 7. There is a rule for this, but it is an extra mental load as it is not straightforward like the rest.

A containter contains $x$ litres of milk. $y$ litres of milk was taken out and replaced by water. How much milk will be there in the container after carrying out this process $(n-1)$ times?

Before 1st replacement, milk was $x$ litres, after replacement it became, $x-y=x\left(1-\displaystyle\frac{y}{x}\right)=m_1$ litres.

Thus, in every litre of mixture, milk is now, $\displaystyle\frac{m_1}{x}$ litre. Assumption here is, the mixture is a homogeneous liquid with milk and water uniformly distributed throughout the mixture.

So reduced amount of milk after second replacement will be,

Likewise, after this process is carried out $(n-1)$ times, the milk in the container will be,

A pump can fill a tank with water in 2 hrs. Because of a leak developed in the tank, it takes now $2\displaystyle\frac{1}{2}$ hrs to fill the tank. The leak will empty the full tank with pump not running, in,

Expressing the relation of leak and pump working together in 1 hr,

Rate of emptying the tank by the leak is then,

Reversing, time taken for the leak to empty the full tank working independently is then 10 hrs.

A student was asked to divide a number by 3, but instead of dividing he multiplied it by 3 and got 29.7 as the result. The correct answer would be,

Assuming the number as $x$,

Alternatively without full division of 29.7 by 3 we get the value of $x$ as 9 plus. Only the fourth choice then satisfies division by 3. This is combined use of number estimation and choice value test. In case of a longer division, this approach would have given the answer faster.

Which of the following fractions is the largest?

Same way we find the first larger than the third, and fourth.

We identified the pattern that denominator of the first is a factor of all the other three and used denominator equalization in all comparisons.

Fraction comparison can also be done by numerator equalization if it is more convenient. In this case, the fraction with smaller denominator will be the larger fraction.

Occasionally when both methods cannot be applied but the numerator and denominator difference is same, the fraction with larger numerator is the larger fraction.

All these three methods are shortcut quick methods for fraction comparison. If none of these methods can be applied, the only path left is to form the LCM of denominators and cross multiply with suitable factors following conventional method of fraction subtraction or addition.

A fisherman can row 2 km against the stream in 20 minutes and return in 15 minutes. The speed of the boat in still water is,

With the stream or downstream speed is, $B+S$ km per hour.

So still water boat speed is,

Two trains running in opposite direction cross a man standing on the platform in 27 secs and 17 secs respectively and they cross each other in 23 secs. The ratio of their speeds is,

When a running train crosses a man standing on the platform, efffectively it traverses its length, and when two trains running in opposite directions cross each other, they cross sum of their lengths in speed that is a sum of their speeds.

$17B=M$, normalizing length unit according to time unit in seconds

Along with the Boats in rivers concepts, Fractions, Factorization, HCF and LCM, Basic profit and loss concepts, Ratio and Proportion, Mixture or alligation, and Pipes and cisterns, we have used the important additional concepts and techniques of Fraction comparison techniques, LCM rules, Divisibility rules, Unit normalization, Number estimation skill and HCF reintroduction technique. These techniques we call as the rich concepts that help to solve relevant problems easily and quickly.

We have also shown how we process the steps mostly in mind thus speeding up the problem solving. This we consider to be within expanded scope of Mental maths.

In the process we have highlighted this time one of the important Essential Mental math skills of factor identification using a short set of divisibility rules.

Concept tutorials and articles on Arithmetic

Factorization or finding out factors

How to solve surds part 1 rationalization

How to find perfect square root of integers or decimals

Ratio and proportion and mixing liquids

Arithmetic problems on mixing liquids and based ages

How to solve arithmetic mixture problems in a few steps 1

How to solve arithmetic mixture problems in a few steps 2

Basic and rich concepts on simple interest and compound interest

How to solve arithmetic problems on work time, work wages and pipes and cisterns

How to solve time work problems in simpler steps type 1

How to solve time work problems in simpler steps type 2

How to solve Clock problems

How to solve Calendar problems